What is Tilted Cervix?

Cervix is the lower region of a woman’s uterus and when this area tilts to have a backward position rather than the normal forward position, it is referred to as tilted cervix or retro-flexed uterus or tilted uterus. A woman may be worried if a tilted cervix is going to affect their fertility and pregnancy. The anatomical variation leading to a tilting uterus may not directly affect a woman’s fertility and pregnancy; however, underlying issues associated with the tilted cervix may possibly affect pregnancy and fertility. 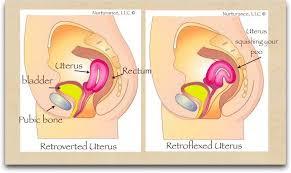 About 20 percent of females in the world have tilted uterus, however, this problem doesn’t cause issues with pregnancy or fertility. In normal situations, the cervix and uterus form a vertically straight line and they are found leaning slightly forward towards the woman’s bladder that is situated in the pelvic cavity. A tilted uterus may also be referred to as tipped uterus because it tends to tip backward at lower area of the uterus called cervix.1,2,3,4,5,6

A woman may develop a tilted cervix at birth meaning at time of embryonic development when she is in her mother’s womb.

Having tilted uterus may arise due to genetic changes, at time of embryonic development, or after birth.1,2

During the development of the embryo in the womb, a woman may have anatomical variations related to the cervix. The cervix may be tilted or tipped backwards rather than tipping forward.

You may have some woman who because of their genetic predisposition, they are likely to have a tipped or tilted uterus.

Inflammation of a woman’s pelvis caused by things like trauma or surgery may cause the cervix to tilt. Also, having sexual infection that brings about inflammation may also result in tilted cervix. Surgery on an organ in the woman’s abdominal cavity may be another cause for a tilted uterus. In some cases, the ligaments that hold a woman’s uterus in place may become overstretched at time of pregnancy and remain that away. This could make the uterus to have a tilted position.

Although a less common cause, tilted uterus may arise when a woman has weak and flexible uterus ligaments. A disease like bladder cancer, colon cancer, or pelvic tumor may alter the uterus position causing the cervix to tilt.

When a woman has a tilted cervix, it doesn’t necessarily affect their ability to conceive. However, other diagnoses that contribute to a tilted uterus may affect an individual’s fertility potential. For example, if a woman has fibroids, endometriosis, or pelvic inflammatory disease, they may contribute to fertility issues.

Fibroids and endometriosis may be treated or corrected through use of a minor surgery. If caught early in advance, pelvic inflammatory disease may be treated using antibiotics. Women with these kinds of diagnoses may require infertility treatments like in vitro fertilization (IVF) or intrauterine insemination (IUI).1,2,3

The cervix is the bottom opening of a woman’s uterus. Dr. Gerald M. DiLeo who is an OB-GYN doing private practice from 1981 says that a tilted uterus doesn’t cause problems like being an impediment to conception. DiLeo notes that the vagina is considered a ‘potential space’ meaning that is not in reality a space unless there is something occupying it like a tampon or a baby. When the vagina isn’t occupied, it walls (vaginal walls), floor, and the roof meet together or collapse. This squishes any semen or fluid-like substance to move towards the back where the cervix (whether tilted or not) is found. So, if a man’s sperms are motile, there will be a successful migration to conception area.4

A tilted cervix wouldn’t usually affect a woman’s ability to become pregnant, but conditions like pelvic inflammatory disease and fibroids or endometriosis can prevent the passing of sperm into a woman’s fallopian tubes thus preventing pregnancy. Also because a tilted cervix causes pain in time of sexual intercourse, some woman may limit their sexual act to some extent, something that contributes to reduced chances of conceiving. 1

There may be more pressure within the woman’s bladder especially in the first trimester. The increased bladder pressure may result in difficulty urinating, incontinence, or leaky urine. A woman may also have back pain. It may be difficult to see the uterus using an ultrasound device until it had enlarged during pregnancy. Doctors use transvaginal ultrasounds in their first trimester to look at how the pregnancy is progressing.2

The uterus expands and straightens towards the last days of the first trimester, particularly in the period between week 10 and week 12. The expansion and straightening of uterus make it lift off the pelvis and get out of the ‘tipped-backwards’ position. At times, you may have the uterus not shifting from the backward position and this occurs when it is stuck or held in place through adhesions. The uterus remains anchored into the woman’s pelvis.2

The risk of having miscarriages increases when you have the uterus not shifting forward. When a woman’s uterus fails to shift forward, it is referred to as incarcerated uterus, and it is usually not a common occurrence. If it is detected early, having an incarcerated uterus may be fixed thus eliminating or reducing the risk of having a miscarriage.2

If you are pregnant and you are experiencing incontinence, constipation, pain within the stomach, pain near the rectum, or inability to urinate, you want to let a doctor know about it. It could indicate incarceration of your uterus. Incarceration may be diagnosed using ultrasound or pelvic exam. Some woman having a tilted cervix may experience labor pain in their back region. Usually, the third trimester doesn’t have problems.

How Does Tilted Cervix Affect Sex?

It is not likely that a tilted uterus will interfere with a woman’s sexual enjoyment or sensation. However, it can make a woman to have painful sexual intercourse at times. The discomfort may arise when a woman is having sex in certain positions. Doing changes in certain sexual positions may eliminate the discomforts.

A woman’s uterus is found sitting in the lower region of the pelvis together with ovaries. When a woman does sex involving deep thrusting or vigorous sex, the penis head may push hard against the vagina walls thus bumping into the ovaries and uterus. When this happens, it can cause bruising, tears, and pain. If a woman is having discomforts when doing sex, they may want to try changing their position and see if it helps. It is important that you talk to a doctor if you are having every sexual position with discomforts or pain whether with or without bleeding.2

The tilted uterus may bring about venous congestion within the pelvis and it results in dilation of organs as they fill with blood.3

The uterus is approximately the size of a fist of a woman, and it sits immediately above the vagina. You can imagine of the letter ‘P’ and take the straight part to be the vagina and the round top to be the part that leans forward to the side of a woman’s belly. A uterus that is tilted or tipped takes the shape of letter ‘Q’ whereby the uterus points towards the rear end or back of a woman. This is the reason you find some women experiencing back ache rather than having a discomfort in the abdomen.6

Because of the way a woman’s uterus points when she has a tilted cervix, it is common for many women to prefer certain intercourse positions than others. For example, a woman may prefer having a face to face position with her male counterpart as opposed to getting rear entry that may be painful. The ‘forward-facing woman-on-top’ may be a favorite intercourse position for many women as opposed to a reverse cowgirl, or rear entry. Missionary position is also a favorite position.6

When a woman has a tipped cervix, she may have symptoms like:1,2,4

In a routine pelvic examination, a tipped uterus may be detected. A doctor inserts his gloved fingers into the woman’s vagina to feel and press against the cervix but in a gentle, slight way. The doctor places the other hand on the woman’s abdomen and also pushes it gently to get a catch of the uterus between the hands. The doctor can feel the woman’s uterus to find out its anatomical variations like the position, size, and shape and to feel if there may be any abnormal growths.3

In some women, their diagnosis for a tilted cervix is done when they are pregnant because a doctor may be able to see it using an ultrasound device.2

If a woman is asymptomatic or not showing symptoms, they may not need treatment, however, if she is having symptoms or other conditions like infections that contribute to a tilted cervix, she may want to seek treatment.

A doctor may manually manipulate a woman’s uterus and get it to its correct position, that’s upright position leaning forward or towards the belly. Certain exercises are designed to help strengthen the tendons and ligaments holding the uterus in the correct position. For example, Kegels can help. Also exercise like knee chest and pelvic contractions also do help. With knee chest, a woman lies down on their back with the two knees bent, the feet placed on floor. She then slowly raises one knee up to her chest while gently pulling it using both hands. The woman holds that position for about 20 seconds then releases the leg. She does the same using the other leg.2

In pelvic contractions, they help to strengthen a woman’s pelvic floor muscles. The woman lies on their back with arms places at the sides and in a relaxed position. She then inhales as she lifts her buttocks off the floor or ground. The woman holds and releases as she exhales. She repeats this step about 10 to 15 times.2,3

Exercises may not help if you have the uterus stuck in place due to adhesions or scarring.

A tilted uterus could be compressed by intestines that are impacted thus cutting off circulation of blood to the woman’s uterus. Massage can help to restore the uterus health. The massage focuses on the woman’s lower pelvic region along with the uterus. It helps to remove blockages in the region so that there is balance of the body and it works better. This way, the health of the uterus is restored.5

If endometriosis causes tilted uterus, the massage proves beneficial in helping break up the endometrial tissue as well as removing residual menstrual blood and clot that a woman’s could not be able to flush out at time of regular cycles. Self fertility massage helps improve the health of a woman’s reproductive system and ensure balance while improving cycles and ovulation.5

This is made of plastic or silicone and it comprises a small device that’s inserted into a woman’s vagina to help prop her uterus into the correct upright position. With pessaries, they can be used on permanent or temporary basis, however, they may contribute in infection if they are left for the long term.2,3

A doctor may consider surgery to reposition the woman’s uterus and eliminate or reduce pain.2,3