Polydipsia occurs when an individual has extreme thirst. Even after drinking water, the thirst doesn’t seem to go away. Polydipsia isn’t a disease but is can be a marker for some health problems like diabetes. If you are having excessive thirst that isn’t resolving even after you drink water, you should talk to a physician.

We are all familiar with the feeling of thirst. When you are thirsty, you want to drink large quantities of fluids to relieve it after you have indulged in strenuous exercises, eaten salty food, or after being outside in a hot sunny day. With this kind of thirst, it can be quenched with water or fluids, but when it comes to polydipsia, it can last for days or even weeks depending on what is causing it. If a person has polydipsia, they tend to feel thirsty almost all the time even when they regularly drink great amounts of fluids. 1,2,3,4

People with polydipsia may also have a condition known as polyuria meaning passing large amounts of urine. The kidneys help to create the right balance of fluids including water, so when you pass 3 or so liters of urine within a period of 24 hours, you may be said to be having polyuria.

Kidneys may also pass other elements, for example potassium and sodium, which exit the body together with urine. If the kidney is passing more urine with the minerals, it can cause changes in those substances within the body something that can lead to other problems. The symptoms of polydipsia largely depend on the cause, but a person will complain of having dry mouth.1,2,3,4

Polydipsia is usually a symptom representing some underlying condition. Causes of polydipsia include:1,2,3 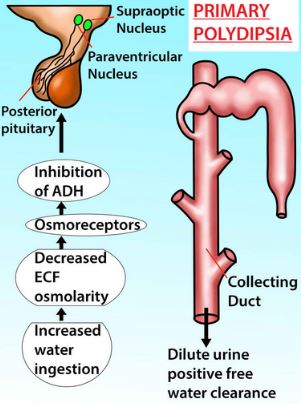 Polydipsia is among the early symptoms that manifest when you have diabetes. It is seen in people with diabetes mellitus in which the body is unable to sufficiently process and utilize glucose or blood sugar. If the body cannot adequately digest blood sugars, it means that you will have the levels of blood sugar being unusually high.

Having high blood sugar makes an individual to feel extremely thirsty. The super high levels of blood sugar experienced in people with diabetes mellitus make them to urinate a lot. The more you urinate, the more the body is dehydrated making you get thirstier and want to drink more water.

This condition occurs when there is an imbalance of body fluids. Although you drink large amounts of water, you can quench the thirst and still have the urge to take more fluids. When you have diabetes insipidus, you may pee a lot even when you have not taken too much water. With diabetes insipidus, it occurs when a person has a problem with their kidneys or the pituitary gland. This gland is responsible for making a hormone that regulates the amount of water the kidneys can keep in the body.

A condition known as psychogenic polydipsia makes an person have an uncontrolled urge for wanting to drink water. Such people may drink water all day although they don’t necessarily need it. Mental illnesses likely to cause polydipsia are such as:

Certain medications like corticosteroids and water pills or diuretics can make a person want to drink a lot of water.

If there is deviation of pH levels within the normal plasma, it can result in polydipsia. Imbalances in base and acid levels in the body may cause the deviation in pH levels. When such changes occur in plasma, there is increased level of dehydration that makes a person want to take excess amounts of water to quench their thirst.6

Having severe burns can cause loss of fluid within the body creating an imbalance in electrolyte and fluid in the body. Osmolality of the body plasma increases when there is imbalance of fluid within the bloodstream or plasma. When there is an increase in osmolality, it brings about physiological changes that compel a person to drink a lot of water.6

In pregnancy, you may have women drinking excess water to satiate their thirst. The thirst is brought about by reduced levels of osmolality that are affected by human chorionic gonadotrophin and vasopressin.6

Having diarrhea causes you to release loose stools and have increased bowel movements. Diarrhea causes dehydration because there is more fluid being secreted into the intestine and reduced absorption of fluid. This causes a disruption in electrolyte and fluid balance making a person drink more water.6

Other causes of polydipsia include:7

There is a connection between diabetes and polydipsia because many diabetics have the problem of drinking too much water. The cause is the elevated blood sugar levels in these people. But how does that happen?

When you have more blood sugar, it tends to draw water into your blood something that makes the kidneys to attempt removing the excess sugar by having more urine. In that process of trying to remove excess sugar, the cells are dehydrated resulting in excess thirst. You find that a person having diabetes takes more water hoping that they will satisfy their thirst, however, that water is extracted and removed as urine. The cycle continues because the individual’s cells are still deprived adequate amounts of water.5

Effects of Polydipsia to the Body

Taking too much water could disorientate the balance of chemistry in an individual’s body. The body rids off of excess water through urinating, however, if the body is unable to keep up, the blood becomes dilute. Too much diluted blood may result in little sodium within the blood, a condition known as hyponatremia. This can create other problems such as damage of bones and organs. Too much water retained in and around the cells may also cause problems like:

As hyponatremia worsens, an individual may get into a coma or even die.

A person having polydipsia will show symptoms such as:3,5

A doctor will diagnose a patient of polydipsia by checking if they have a history of suffering from diabetes. The doctor may order urine and blood tests aimed at checking the patient’s blood sugar levels and to identify if the symptoms are due to a case of diabetes.

This tests for the sugar levels within the past 3 months and it could be used at the time when diabetes mellitus becomes diagnosed.

This test may be ordered in pregnant women to determine the tolerance level of glucose.

Others tests may be ordered by the doctor after it has been determined that diabetes is not the cause. These tests include:

If a physician suspects that an individual has psychogenic polydipsia, a test for low levels of sodium in blood may be ordered. But these low sodium levels might not or may be an appendage to this particular cause of polydipsia.1,5

The doctor will order for renal function testing and glucose level testing to try to rule out any possibility of the patient having kidney issues and diabetes, in that order.

Before treating a patient, a doctor will first have to establish the cause of polydipsia. Treatment may include:

A patient can be prescribed a medication known as desmopressin, which has become popular in treating polydipsia. The drug helps regulate polydipsia by lowering the amount of urine that the body produces, this in turn, reduces the urge for a patient to drink much water. Desmopressin kind of interrupts the cycle of thirst and drinking water or fluids that is set by polydipsia. Desmopressin may be considered a synthetic form of vasopressin.

The polydipsia condition can be managed without using medication by adopting a behavioral approach. This includes interventions and modifications. The doctor has to determine the best course of treatment depending on the test results obtained and other factors observed during the diagnosis phase. For example, psychogenic polydipsia can be treated by counseling the individual to overcome his or her compulsion to take large amounts of fluids when not needed.

For diabetics, the aim is to lower blood sugar levels. A doctor will come up with ways to reduce the sugar levels for example, exercising the body, using medication, and having meal plans intended to work for diabetics. Medication may involve use of insulin if a patient suffers from type 1 diabetes. In the case of diabetes insipidus patients, it is managed by taking water as the doctor advices. The aim of taking water is to prevent dehydration.